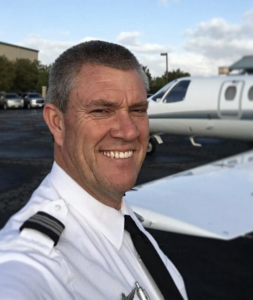 with the APA Safety Award for his actions in command of AA Flight 149 on Nov. 9, 2004. Details of Captain Petschow’s superlative airmanship and resourcefulness can be found in the Spring/Summer 2006 edition of Flightline magazine. Congratulations and well done to Captain Petschow.

Flying along, cool and comfortable at FL 360 just east of Alamosa, Colo. on the homebound leg to Los Angeles, Captain Ken Petschow had no worries, except a report of turbulence ahead by a United pilot. Ken, whose home was destroyed by the California fires in fall 2003, was used to dealing with adversity.

But he and the rest of the crew on AA-149 quickly found out there was something worse than dealing with a federal disaster agency — when a first officer becomes incapacitated in f light. Ken felt the yaw right away, then searched for its cause. The nose moved further right and Ken noticed his first officer pushing the right rudder and extending both his legs and arms as if deep into a good stretch.

Ken no sooner said “Hey, what are you doing?” when  he realized his first officer was in trouble. His first officer had collapsed, with his leg locked in a full right rudder push. It took a few seconds to put a plan into action. Due to the awkward way his foot was jammed on the rudder, the airplane yawed hard right. Ken tried to counter with left rudder, bu realized the only way to release the rudder was toreach over and flip the catch on the seat release,which then slammed hard against the aft stop. Easingthe rudder pressure helped solve one problem, butsoon created another. With the rudder now centered,the airplane went from a right skid to a nose highclimb, then quickly slowed.

With the airspeed deteriorating, Ken pushed forward on the yoke but found the only way he could get the nose lower was to bank right and let it fall through. But sometimes, too much of a good thing can be as bad as too little. With airspeed decreasing, Ken rolled right and the nose rapidly fell below the horizon and started gaining speed almost too quickly. Not unaware of the high terrain, Ken tried to declare an emergency and inform traffic of his descent and get vectors to the nearest airport. With the VSI pegged, the crop circles of central Colorado were growing faster than he was leveling off, but he was making progress arresting his rate of descent. Ken leveled at 14,000 feet but didn’t notice his audio panel switches were knocked off their settings and his “Mayday” had not gone out over the air.

Many thoughts, mostly questions, were competing for his attention as he considered their situation: What should he tell the flight attendants? How should he calm and reassure the passengers? Which divert field offered the best medical help for his copilot? What condition was his aircraft in? And he needed to establish contact with ATC.An emergency chime summoned a flight attendant, who was only able to get in the cockpit after Ken reached back and opened the door.The flight attendants went to work finding help. A nurse, a non-revving AA mechanic, and an Air Force pilot volunteered to help pull the first officer out of the cockpit and lay him on the floor of the galley.  The nurse, more used to delivering babies than intervening in airborne crises, checked his vital signs and kept him comfortable.

The Air Force pilot asked the flight attendants if help was needed in the cockpit. Ken told him, “You’ll do,” and the new copilot strapped in to help with checklists and radio calls. Concerned with his first officer’s condition, and knowing Peterson Air Force Base had medical facilities,Ken decided to put it down in Colorado Springs instead of Denver. Setup for the approach was complicated by high altitude and terrain, but solving for high speed and a short final wasn’t nearly as difficult as understanding what had just happened to his first officer. Having prepared for severe turbulence because of the United pirep, the carts had been stowed and the flight attendants were already seated. Most of the passengers thought the roll and emergency descent were caused by turbulence.

On the ground, paramedics brought the copilot to the hospital and the passengers were rebooked, taking along with them an exciting story for the grandkids. Ken stayed at the hospital until his first officer’s wife arrived later that night.

Captain Ken Petschow knows training and experience — even when forced into an unlikely rendezvous with instinct and luck — cannot be taken for granted. He was given the Chief Pilot’s Award “For his superlative airmanship in handling an in-flight emergency involving the sudden incapacitation of his first officer,” and has been nominated for the APA Safety Award. Lt. Colonel Scott Neumann,former F-16 and B-2 test pilot, logged three tenths of an hour in a B-737, and reportedly received an air medal from the USAF for his contribution.